March 2015
Guys, I love Texas. Texas was the place I grew up. It played host to the part of my childhood that I remember to be fun and full of cartoons, sidewalk chalk and supportive friends. During high school, I wasn’t so appreciative of the place–as most angsty teens. I couldn’t wait to get out and make a life of my own. Little did I know that I would spend four more years in Texas and completely fall in love with Austin. I can gush about why I think growing up in Texas was a big positive in my life (or you can watch Boyhood and feel nostalgia like you’ve never felt before), but I’ll just crack on with the post now.

My college friend, Matt, and I wanted to take a road trip. However, we couldn’t go far because I didn’t have too much time. Also, my parents weren’t okay with it. I’ll have to save my Kerouac-style trip for another day. Some other friends of ours joined us along the way, but it was mainly just Matt and me kicking it Texas style. Matt grew up in Boerne, which is small town in Texas. I felt like my #texaslove was either already apparent in him or lurking just under the surface.

We fueled up on cookies, chips and some trail mix (guess which two things we devoured and which we didn’t touch?) and hit the road in my trusty Ford Fiesta. From Austin to Marfa!

At the first sight of mountains, I had to stop the car and take pictures. The beautiful thing about our friendship is that Matt doesn’t like being in pictures (though he looks great in them) and I LOVE forcing people to be in pictures. It works out really well. For me. 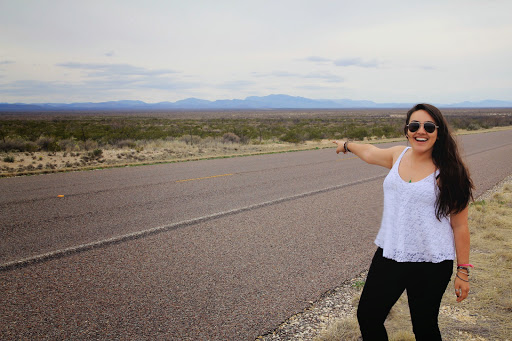 LOOK AT THEM! They were everywhere!

This is Alpine, Texas. Home of Sul Ross State University (where Mason from Boyhood ends up going) and gorgeous views of Big Bend. We loved the juxtaposition of neon signs & desert-like climate. It was very Las Vegas minus the flash. Those golden arches look beautiful don’t they? 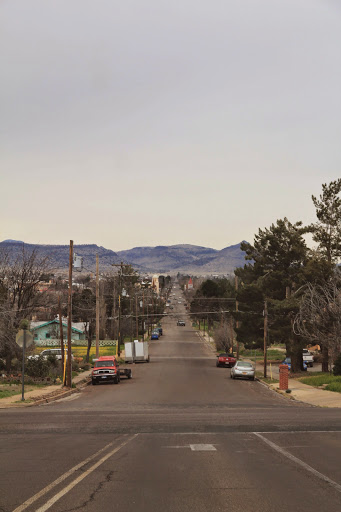 We didn’t realize we were going to return to Alpine, but it is kind of the largest town in this area of Texas. It’s not large, but it does have food joints that are open past 5pm on a Monday–which is what we were in dire need of. Anyway, the Prada store installation in Valentine, Texas never closes so we headed there for sunset. 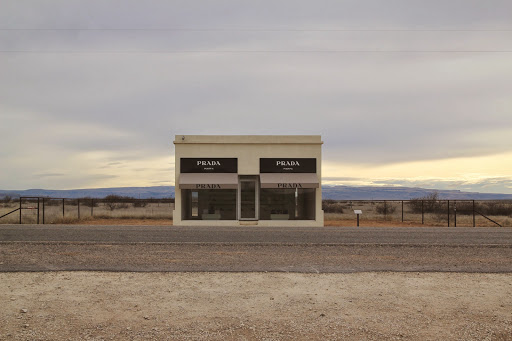 Not for those who do not appreciate art, because it is just a block of a building in the middle of nowhere. Gorgeous views, but not much of a thing to see unless you’re ready to think of it in terms of contemporary art.

Marfa was completely asleep on Monday. And Tuesday. We didn’t plan very much, so we didn’t realize that the town was basically closed on Monday & Tuesday because there’s no reason to be open. The weekends are popping because tourists go there for the Chinati Foundation & all of its art galleries. So, we had to adjust our schedule, but that’s part of the adventure, isn’t it? 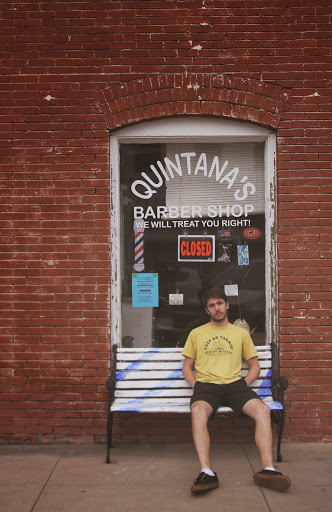 Most things in Marfa looked pretty cool to us. Mainly because they were a little worn, pretty minimal and very artsy.

Though we didn’t try to stick around to see the Marfa Lights (I saw them when I was a kid actually. Not impressive really), we looked out through the telescopes. It was cool! 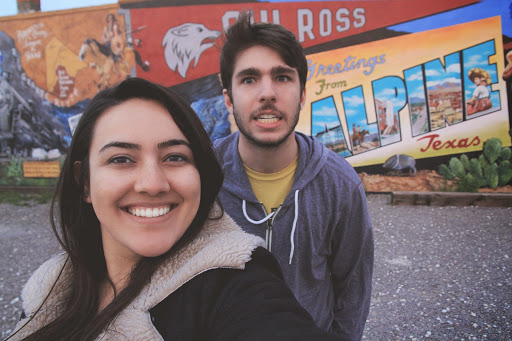 When visiting West Texas, you just have to go with a bit of a flexible plan/schedule. Nobody is in a rush, so you don’t need to be either. It wasn’t a problem for us because we didn’t have expectations, but it was something I realized quickly. It’s a beautiful area of the world, though. 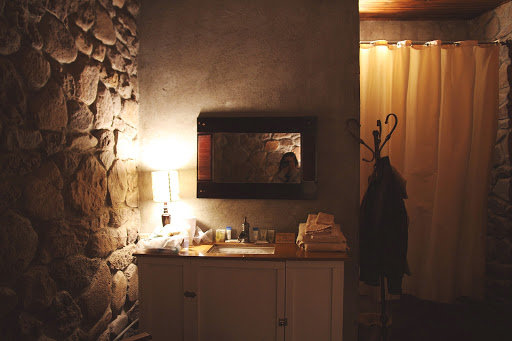 We stayed in the Stone Village Tourist Camp in a camp room. This means that the door is a flimsy screen door, there’s no central heating or AC and there’s no running water in the winter. However, we loved the 70’s-esque, kitschy, cabin aesthetic. The lampshade next to the beds was covered in scenes of a sort of turn-of-the-century camp in the woods? It was a bit creepy/retro/cool. Loved it. The beds were also really warm because we had like three blankets. Though we have no complaints, our friends were a bit horrified. They thought it looked like a murder cabin. I don’t have a false sense of security, but Fort Davis (where we were staying) didn’t strike me as murder-central. It’s a bit in the middle of nowhere.
The first night we chilled by the pool & fire & just stargazed. Stars are beautiful over there (hence McDonald Observatory). Due to low clouds & fog, we couldn’t attend the start party at the observatory like we wanted to.

The bluebonnets just kind of hit the Texas-vibes home.

This abandoned movie set (Contrabando Movie Set) is 9.5 miles west of Lajitas, Texas. Also, it’s incredibly close to the border. Those mountains there? They are Mexico. Yeah, we drove along the Rio Grande and just marveled at how similar Texas looks to Mexico.
Anyway, this set was surprisingly intact. I believe it was build in 1985 and then abandoned. It makes no sense, but there’s a restroom for visitors. So, I’m guessing someone keeps it up? It’s pretty picturesque. 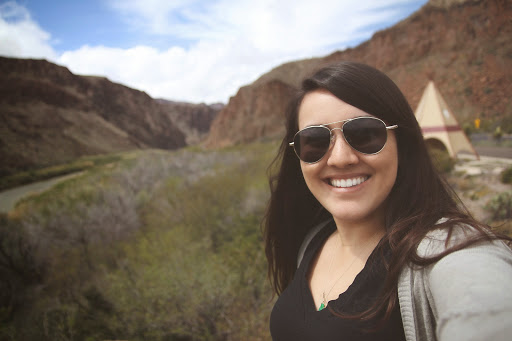 There’s a Tipi Rest Stop further down the road from the movie set. So, it’s just three large Tipis where you can eat lunch or something looking at the gorgeous landscape. 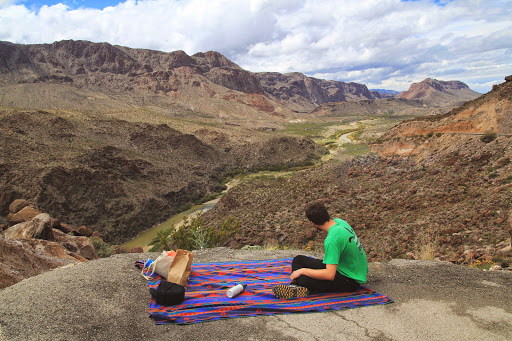 However, we went further uphill for a better view to watch while we ate. Goodness look at that. Mexico! On the other side of that small, dried up Rio Grande! We loved it. 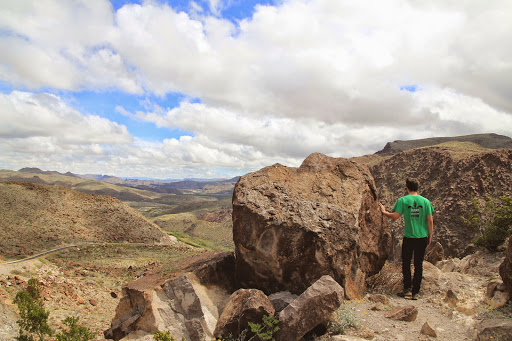 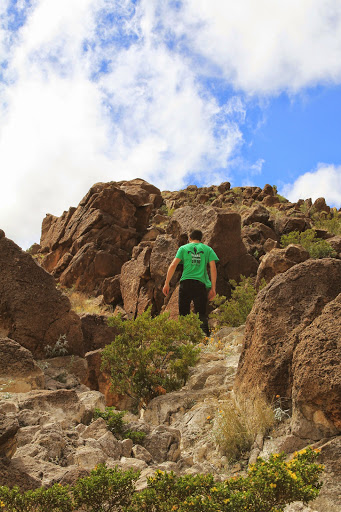 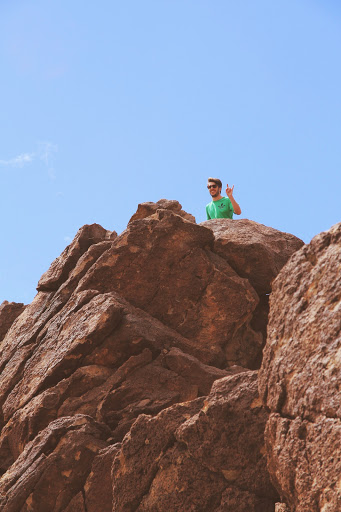 Just a bit of light *EXTREMELY LIGHT* hiking. We could’ve hiked more, but there wasn’t really time. I’ll just have to go back 🙂 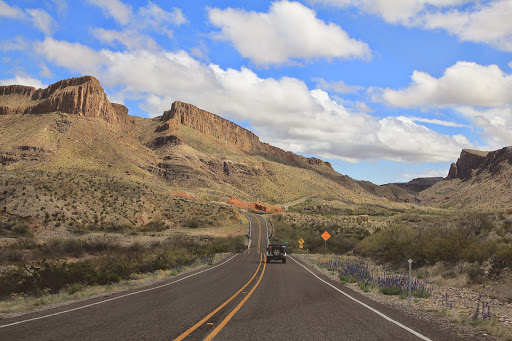 In Lajitas, there exists the world’s largest LONGHORN COLLECTION. As a UT grad, I felt like I needed to go there and be a bit prideful. Not going to lie, it was creepy. But in a strangely comforting way? Maybe. 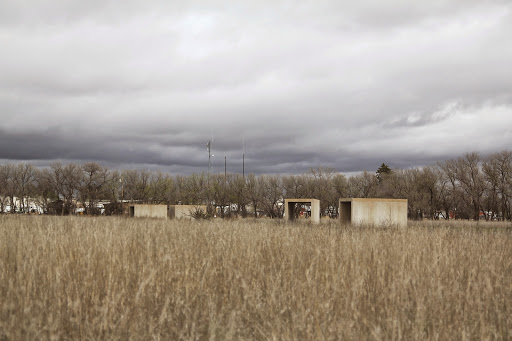 On the last day, we knew we wanted to finally go to Marfa while things were open. We got a little tour of Chinati’s installations as well as the concrete boxes from Donald Judd. We had a bit of fun walking through the boxes. Also, we ate lunch at Capri (I think that’s what it was called? There wasn’t a sign or really much of a way of finding it) and loved their fried chicken. So southern & crunchy & spicy. Marfa was good to us and the main reason we wanted to go. If you like contemporary art, go check out more galleries in Marfa. We only hit up Chinati & Chamberlain, but I wouldn’t have minded going to the Ballroom or something.
Overall, great trip. I’d recommend going from Thursday to Sunday or something like that. Also, make sure you know where gas stations are! Fill up when you can because you could go 70 miles without a gas station. Also, camp at El Cosmico because our friends were there and it was cool! Lots of different camping options & live music & interesting people.
If you want to be surrounded (and amazed) by beautiful mountains & artsy people, take a trip to West Texas. Make sure you have your roadtrip playlists & snacks sorted. They make all the difference.
Love,
Young Lion 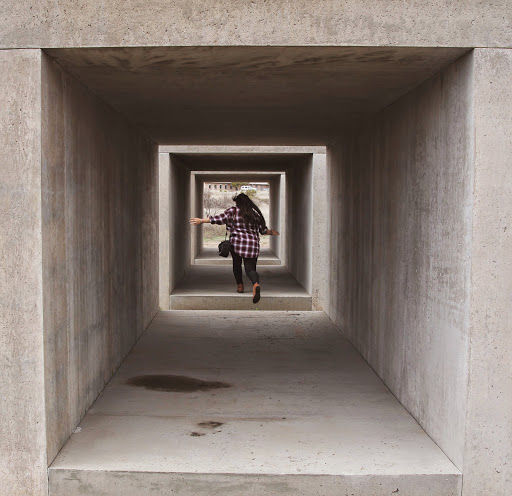